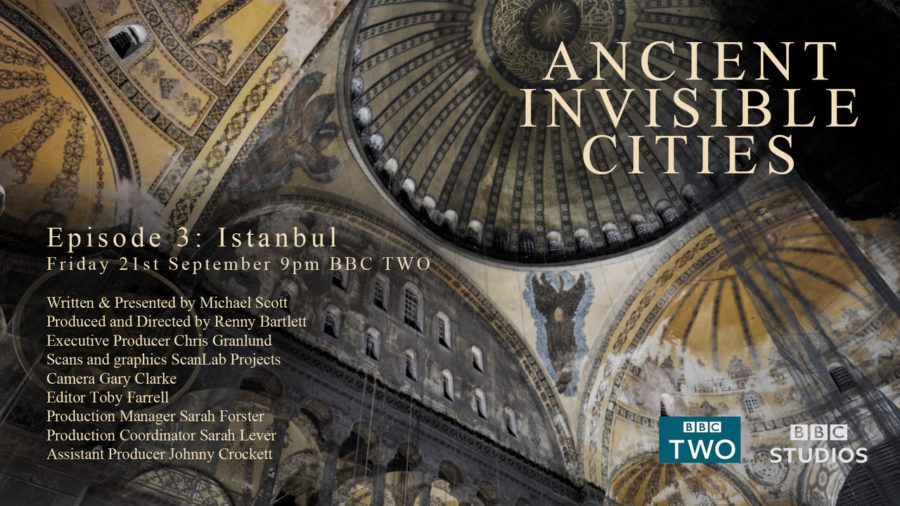 In September 2018, my new BBC2 series Ancient Invisible Cities airs. In this 3 part series, made by BBC Studios, we explore the cities of Cairo, Athens and Istanbul not only in person but using the latest in 3D laser scanning and Virtual Reality technology overseen by the ScanLabs team (see the image above – what did we find in this Athens underground car park?). In this series, we filmed underground, underwater and high above ground. We accessed locations never filmed before due to the difficulties of getting to them, and other locations that had not been visited in over a decade. As a result you’ll see a fun array of safety gear on display throughout, with me amongst other things having to abseil 16 m underground, climb down collapsing staircases, squeeze my way through cave tunnels and dive underwater to explore recently discovered ancient remains!

The series is a co-production with PBS in America – so you may well see a PBS version with American presenter Darius Arya airing in the USA around the same time. We filmed both versions side by side (you may remember lots of tweets at the time of Darius and I on location together). Each series is different though as Darius and I react to, and reflect on, what we are seeing and exploring differently.

This series is also part of the Invisible Cities format, and is the third installment in this format after Rome’s Invisible City in 2016 and Italy’s Invisible Cities in 2017. Both of those were co-presented in the UK BBC version with Alexander Armstrong, with me also filming a solo version of the series for BBC World Wide. This series I’m flying solo both in the UK and BBC Worldwide versions – wish me luck! 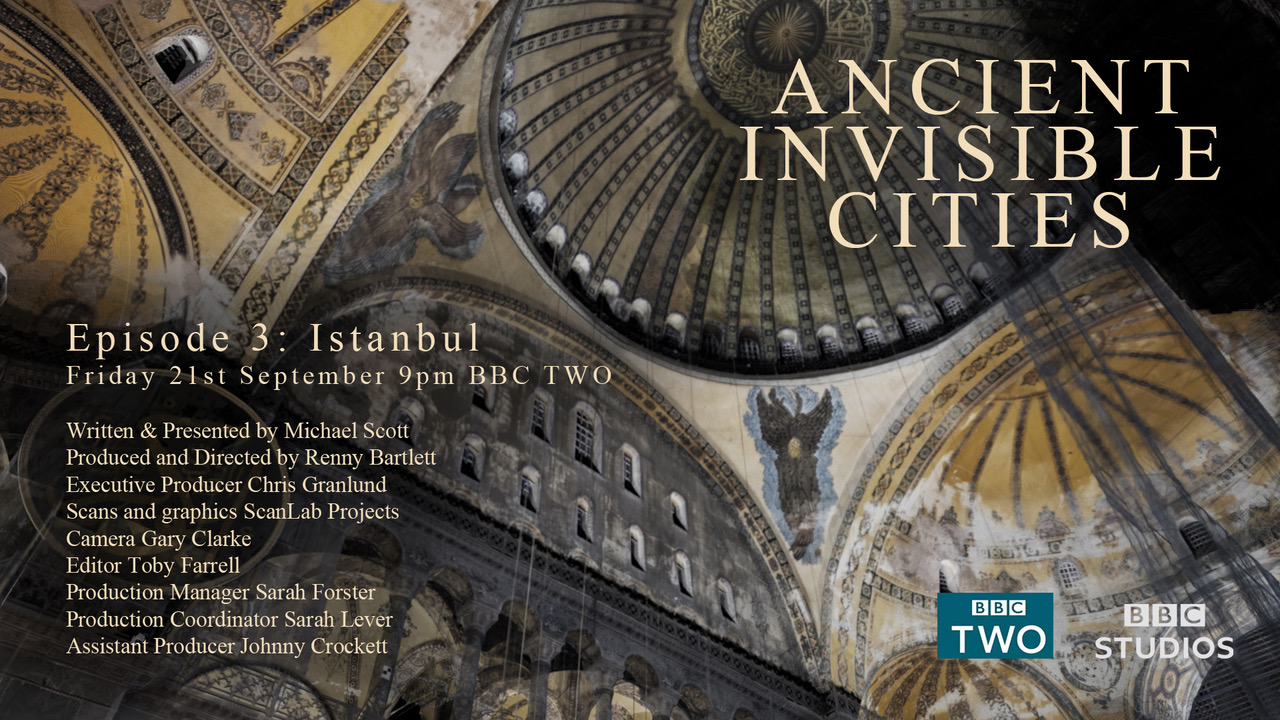 Cairo was an incredible city to film in. Among other amazing locations, we explored the Great Pyramid of the Pharaoh Khufu at Giza, hoping to understand the precision with which they were able to build it over 4500 years ago. In the photo below you can see my feet as we headed down a tunnel leading to a subterranean chamber deep in the bedrock underneath the Great Pyramid – the last surviving wonder of the ancient world. Roughly 5.9 million tonnes of Pyramid + the total weight of bedrock were above our heads when we were down in this underground chamber – which I don’t mind admitting had me sweating a little! 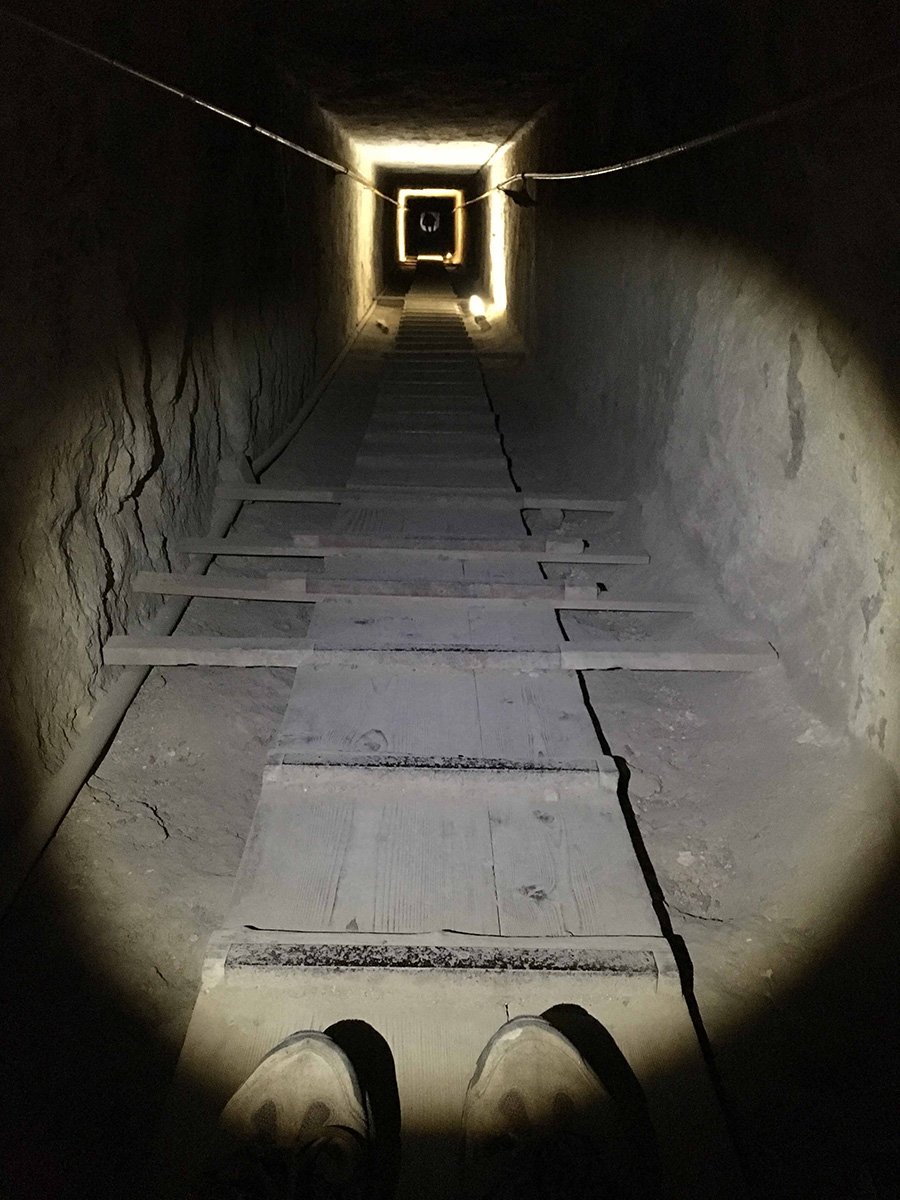 The 3D laser scanning here revealed how the different chambers of the structure aligned with the tip of the Pyramid – an incredible feat!

In Athens, we not only ended up abseiling down a 16 m shaft to visit a Hadrianic era aqueduct (see the photo of me with all my climbing gear about to head underground), but also ended up caving through an ancient mining system at Laurion. I have never been in such tight underground spaces before – it was both exhilarating and terrifying all at the same time! 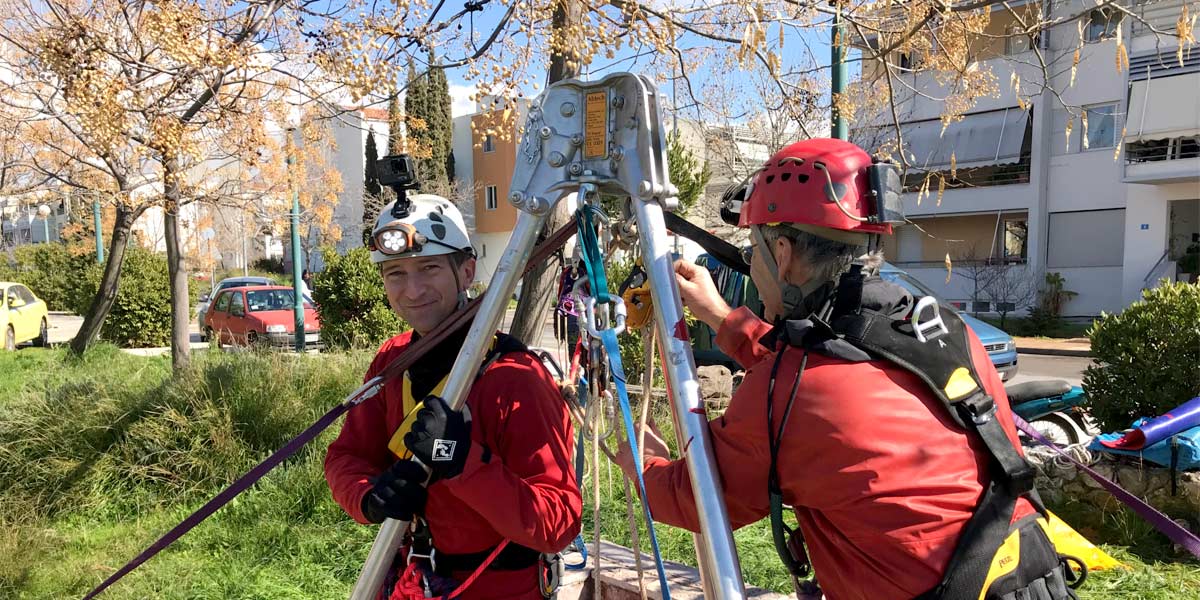 In Istanbul, we explored not only the wonder that is the Haghia Sophia, but also the easily missable and yet vast interior spaces of the city’s ancient hippodrome. That meant a whole other set of safety gear (see the photo below)  And the 3D scanning team took to the skies in a helicopter to undertake photogrammetry of the entire ancient centre of Istanbul – creating stunning 3D models. 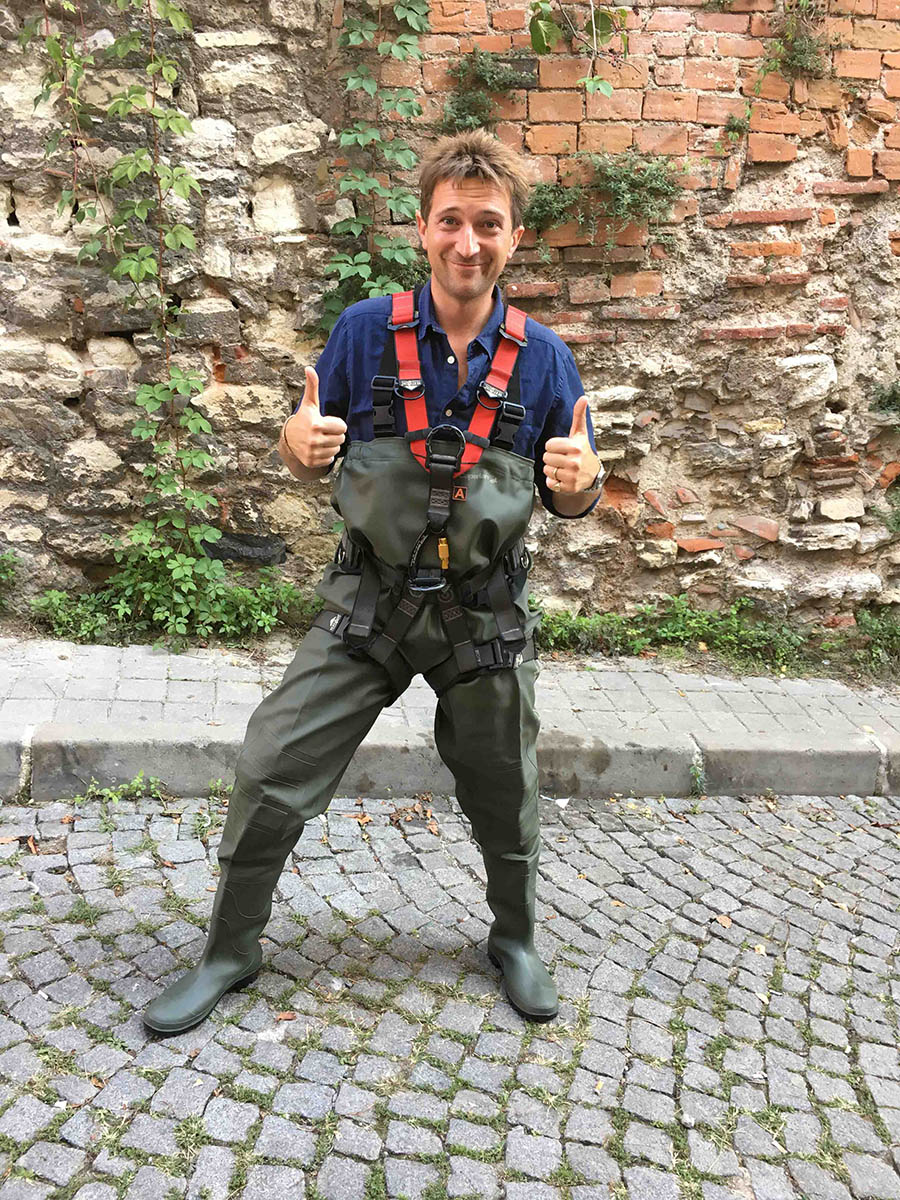 And of course, I could not miss out on my favourite past time in Istanbul, a cut-throat shave in one of the local barber shops behind the Grand Bazaar. 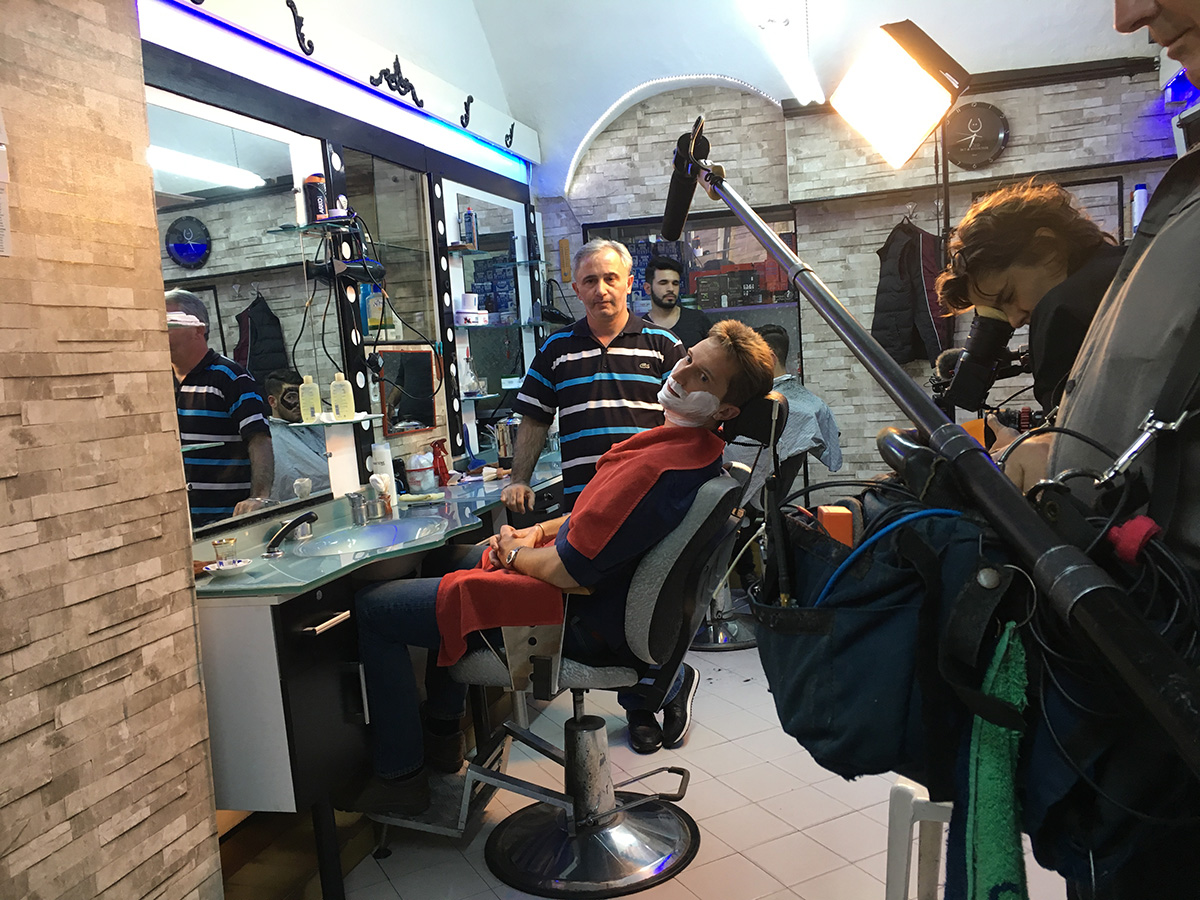 I hope you enjoy the series!

Follow my page on Facebook https://www.facebook.com/michaelscottacademic/ where I’ll be sharing more behind the scenes photos before and after the series airs, as well as doing weekly Live Q&As (please do submit any questions you have via the Live Q&A event tab on the Facebook page). The first Live Q&A is on Thursday 30th August 4pm (UK time).

I’ll also be live tweeting alongside the programmes with extra facts, ideas and behind the scenes filming stories. Please follow along with #invisiblecitiesBBC and tweet me your questions @profmcscott

Please also leave your feedback on the series via a 2 minute questionnaire available at www.msfeedback.net