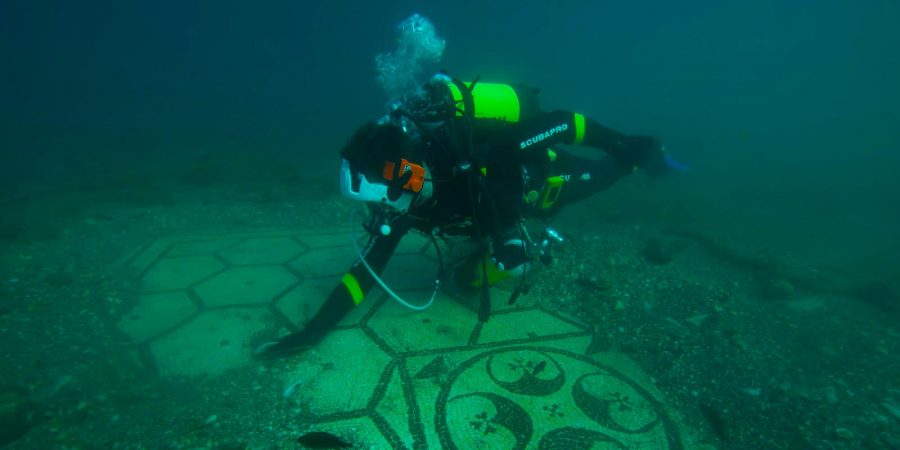 Xander Armstrong and I are back on BBC 1 starting this Wednesday 4th January with a new series: Italy’s Invisible Cities. Together we are exploring Naples (4th Jan 9pm), Venice (11th Jan 9pm) and Florence (1st Feb 9pm). 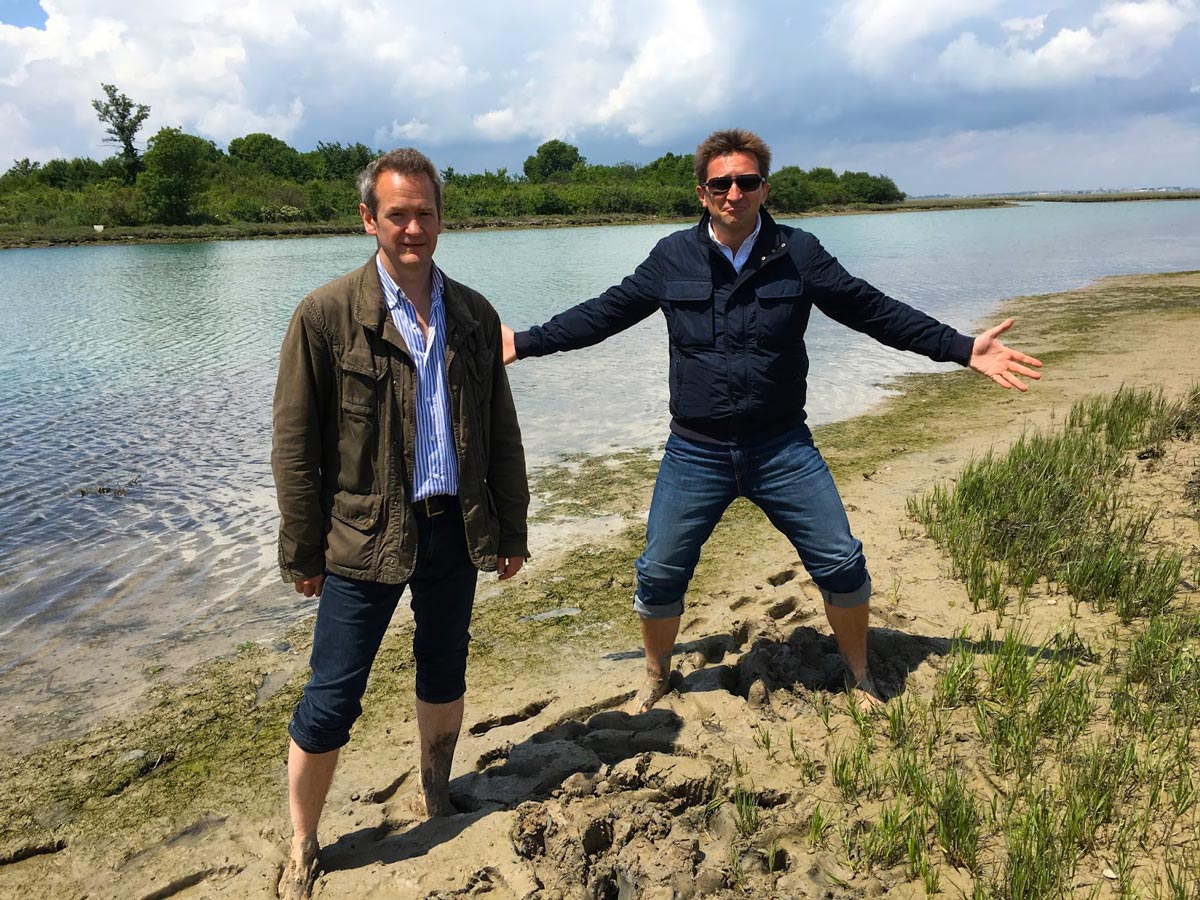 These are cities close to my heart: Naples is a place I have been too many times as a gateway to the wonderful archaeology and ancient history of the region. Venice I have family in and so am a frequent visitor. And Florence – well I lived in Florence for a while when I was 18-19 and it was where I first learnt Italian – so the place is full of memories for me.

But in each case in making these programmes, I felt I was discovering these cities afresh. Naples perhaps was the most startling – a place people often pass through rather than spend time in, it is filled with an infectious energy that sweeps you up and carries you along. That energy comes from, I think, the fact that the people of Naples are long used to living on a geothermal hotplate (the Campei Flegrei – the Burning Fields) and so are very used to the mentality that each day could be their last (the motto of the region is Carpe Diem – seize the day!) Wherever you go in Naples beauty and danger are two sides of the same coin and it is a beguiling combination! It also led to some very bizarre experiences: like coming across this 1930s taxi (see pic below) – buried in the Bourbon tunnels underneath Naples having been confiscated by the Fascists! And equally a chance for me to scuba dive and discover the remains of a beautiful Roman villa floor mosaic (see pic too!) 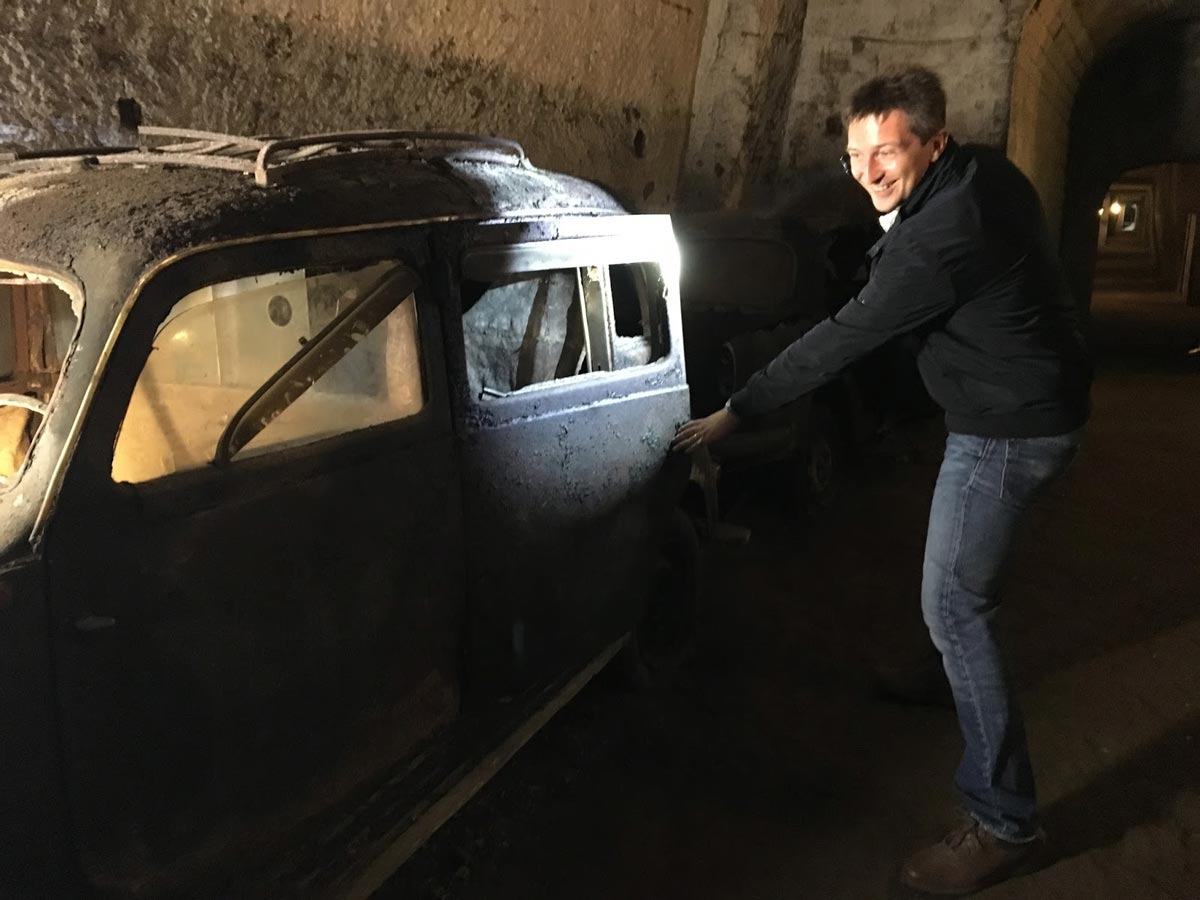 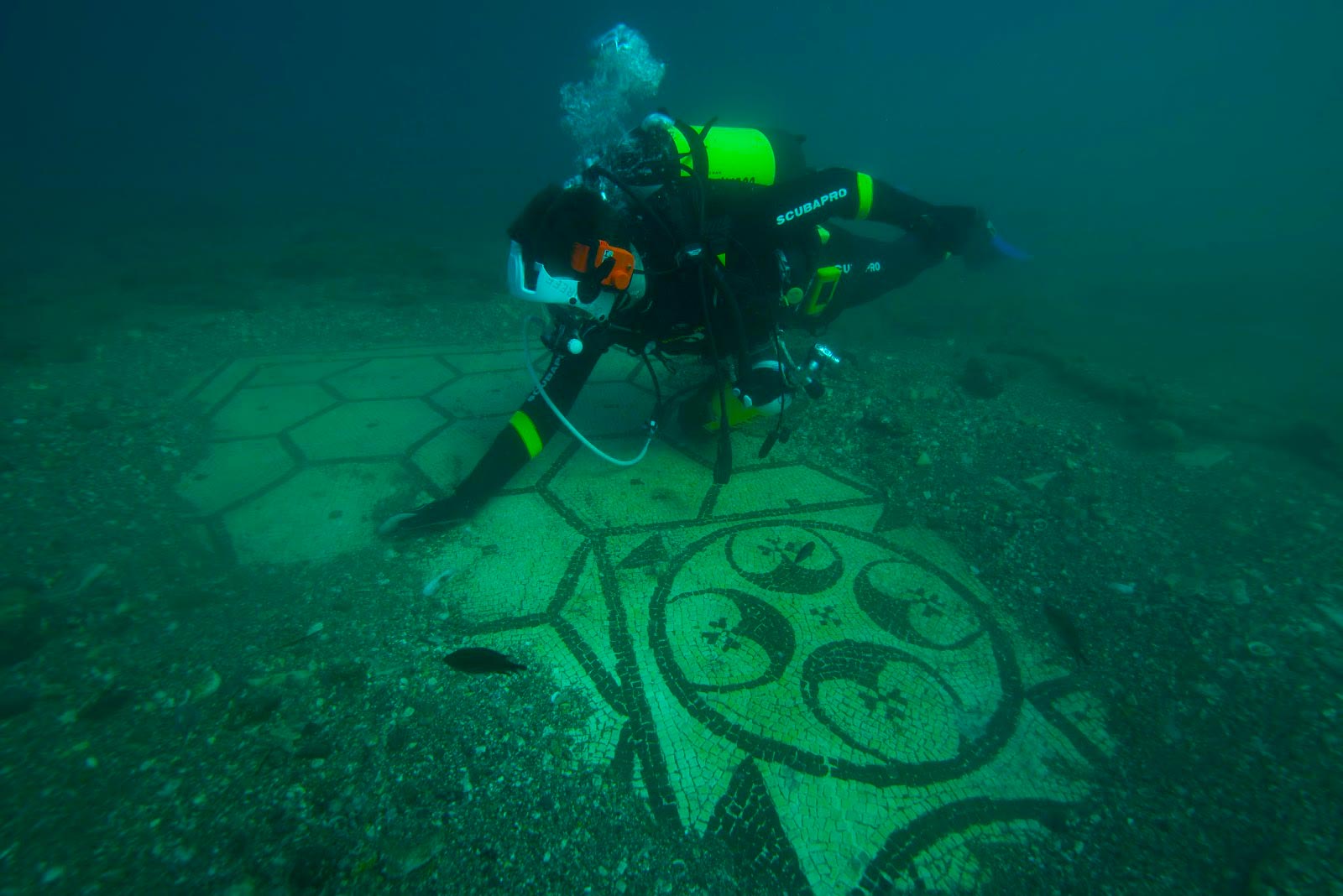 Venice on the other hand is a testament to humanity ingenuity and ability to survive and thrive in unlikely locations. The photo at the top of this post is of Xander and I standing in the mud of a Venetian lagoon island that has not yet been built on – this IS Venice (or at least how the first settlers in the 6th century found it). And from that has arisen the unique city of Venice today – thanks to a number of invisible magic tricks we uncover in the series. The picture below is me scuba diving in a venetian canal in search of one of them… as you can see, visibility was an issue as we hunted in the murky depths for the secret of Venice’s success and survival! 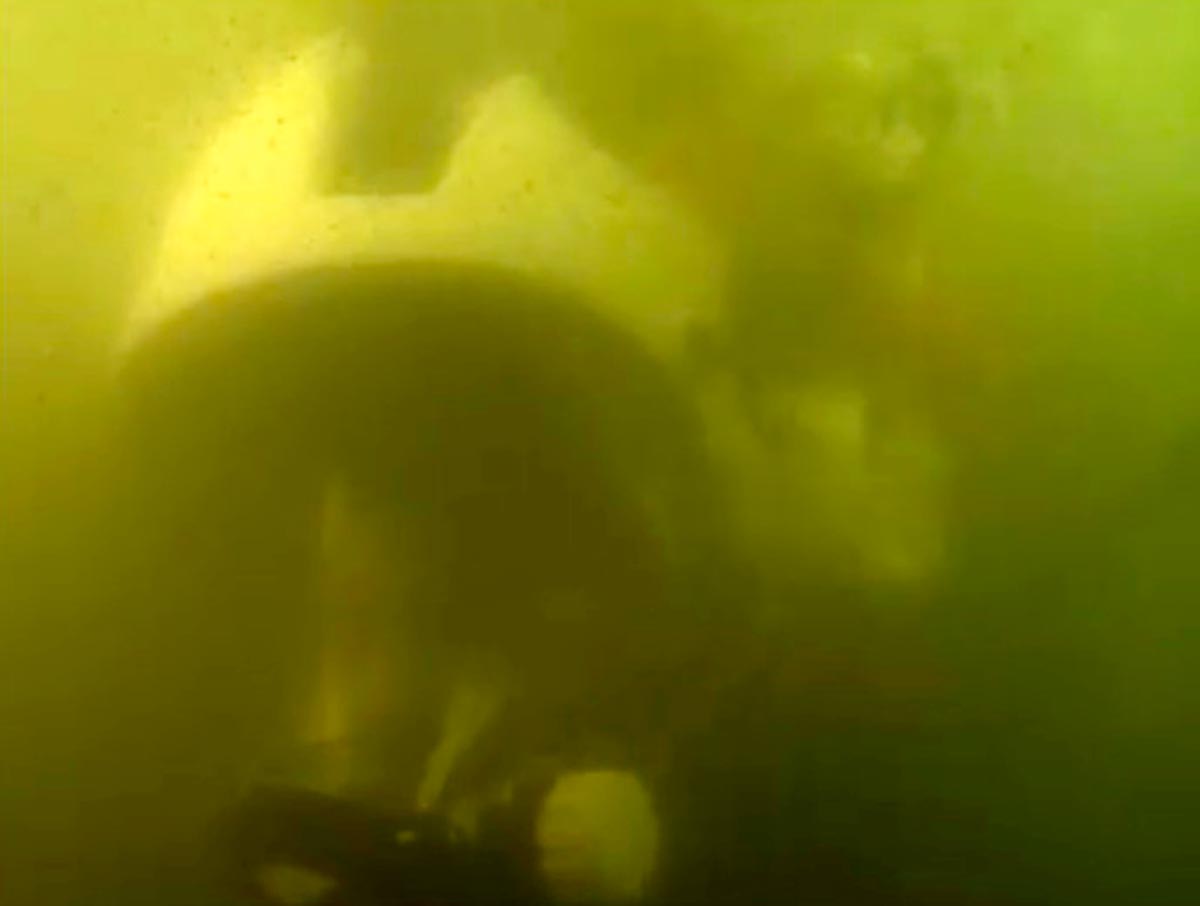 They called the city ‘la Serenissima’ – the ‘Most Serene’ But there was nothing serene about Venetian power and naval might in the 11th-16th centuries. Venice was THE gateway from Europe to the East and reveled in the trade and plunder that it got involved in – you only need to look at the front of St Marks to see how Venice liked to show off the wares it has brought back to the city.

Florence is also a serene looking city. When I was living there, it was a delight to wonder its streets, gaze along the Arno river and let time slip away sitting in a cafe. But what we discovered on this trip below was the frantic competition and rivalry that flowed underneath its serene countenance – competition that was on-going at every level of Florentine society.

For me the big revelation was seeing the tiny traces of this street level competition still present in the Florentine landscape – e.g. small markers on building in squares denoting the territory of rival gangs, and the plaques with the titles that the leaders of these gangs gave themselves. Titles like ‘Royal King’ – and they took other gang leaders to court if they tried to use the same title! From this, through to the ‘calcio storico’ – a football/rugby combo with no rules (bar dont kick the other person in the face) that is played between the different sectors of the city (see the photo below of the players after the match – they had all been wearing tops at the beginning but they got ripped to sheds in the wrestling tackles); to the dark power politics of the city’s leadership – particularly the Medici family who executed 80 people following a conspiracy against them. 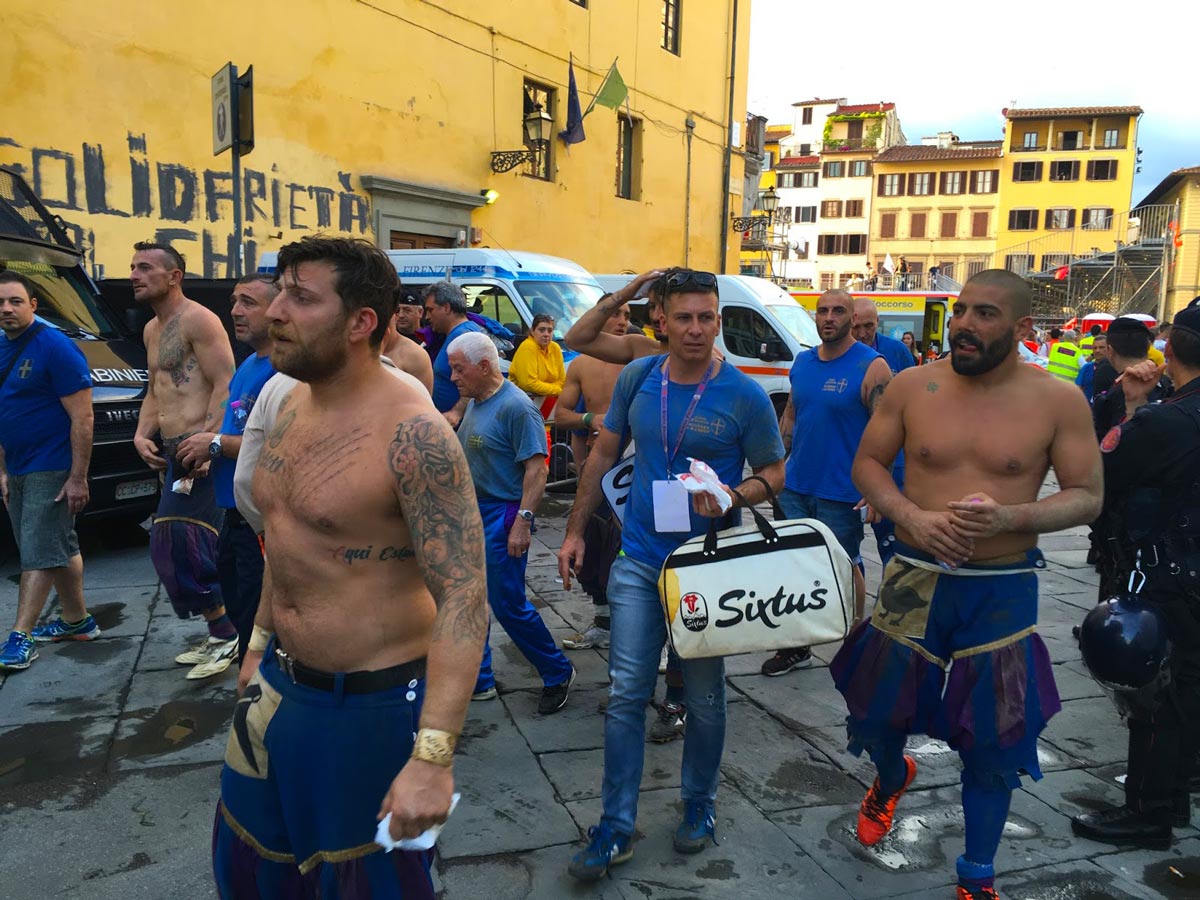 Throughout the programmes, we were working with the scanning team ScanLabs who were mapping the cities in 3D laser scans, as well as underwater scanning. Awesome work from them meant we – and you – are able to experience these cities in Virtual Reality. Here’s Xander and I with the team in Florence overlooking the Arno and the Ponte Vecchio 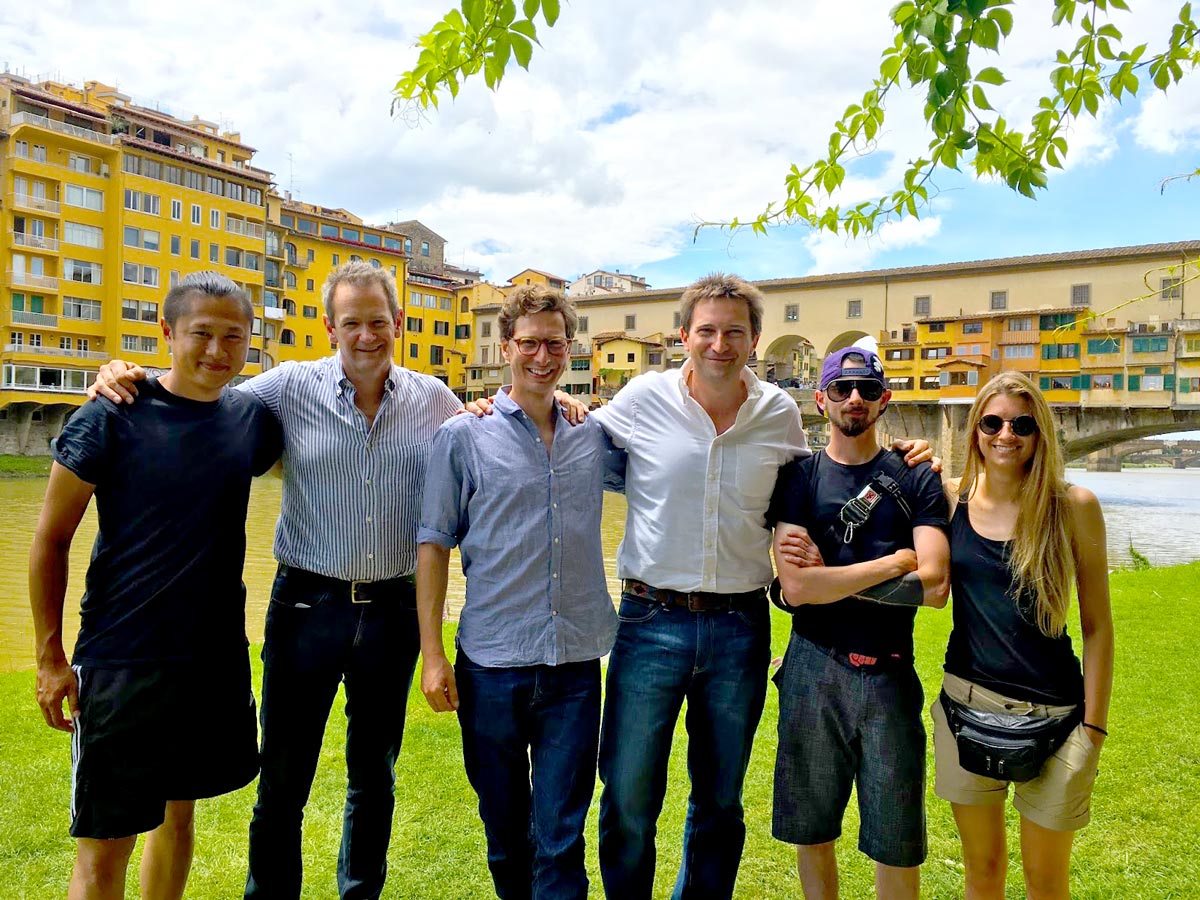 Hope you enjoy the series – and don’t forget to let me know your thoughts by completing a quick 2 min questionaire at www.msfeedback.net  – many thanks! M

Ancient Worlds - An Epic History of East and West - Out This Week!