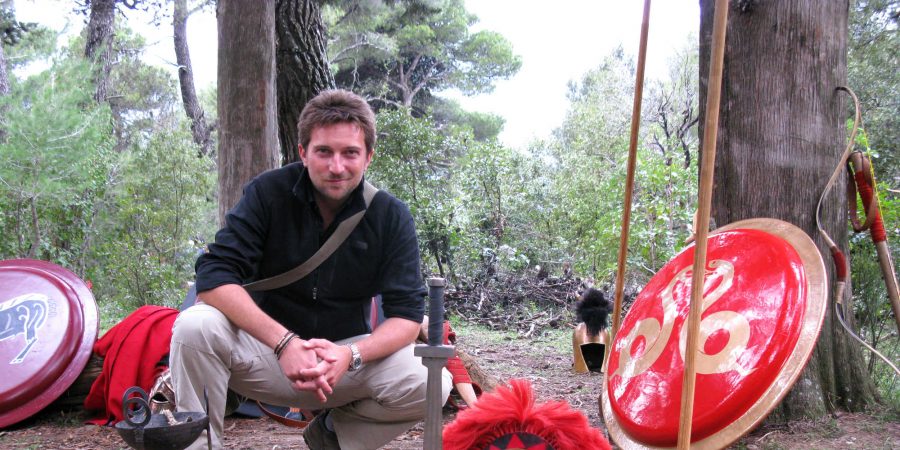 Michael ScottBlogT-3 hours to WHO WERE THE GREEKS!

I’ve written a number of blogs to accompany the show tonight, that you can read by following the links below:

But here, I wanted to offer some thoughts in the count down to the TX on my favourite moments from the series.

Without doubt, one of the greatest moment for me was working with Giovanni Verri, at the British Museum, who is using infra-red imaging technology to see the remains of coloured paint (particularly Egyptian blue) on the sculptures of the Parthenon. You can see when we conduct the test in episode 2 (to be shown next week on Thursday 4th July BBC 2 9pm) what an amazing revelation his results are. I have looked at these sculptures countless time and – there – thanks to cutting edge technology, I was seeing something that had been hidden from us for 2500 thousand years. The remains of bright Egyptian blue paint shimmering like stars in the sky.

But I also hugely enjoyed meeting and talking with Prof Stefanos Geroulanos in Athens. He is a respected professor of medicine based in Greece and Germany, but also has a passion for the ancient world and particularly for ancient medicine. I found his approach to thinking through how ancient healing sanctuaries like at Epidauros worked so refreshing.

He puts – I think rightly – a huge emphasis on the way the whole experience of visiting one of these places from beginning to end was orchestrated to put you in a positive, hopeful state of mind, as well as combining the medical skills of the priests and doctors with the strong belief in the healing powers of the gods.

My thanks go out to all those who contributed to these programmes – your enthusiasm and knowledge has been a real joy to witness!

I very much hope you all enjoy the programmes as well. I will be live tweeting during the programme, so do get in touch with your questions and comments #WWTG @drmichaelcscott.

One final thought: One of the huge benefits of my job is that I get to learn something new every day. One of the most interesting came about through the recent post-graduate colloquium organised at Warwick University by the Department of Classics’ post-grad students. One of the papers was about Petrarch – the 14th Italian Humanist scholar, who was extremely important in kick-starting the study of the ancient Greek and Roman worlds. And yet – as this paper demonstrated – he had been relentlessly interrogated by his family circle about the point and value of studying the ancient world! It seems that from the very beginning of this subject as a subject of study, that it has gone hand in hand with a questioning of its worth.

Many today see that as a threat. But it occurred to me that perhaps this is one of Classics’ real strengths. Embedded in the study of the subject is a relentless sense of demonstrating its worth and importance, of explaining why it matters. That is a tradition that I would be very proud to think ‘Who Were the Greeks?’ stood within and contributed to.

Boiotia - the dancing floor of Ares!