You’re Dead to Me – The Spartans!

Michael ScottBlogYou’re Dead to Me – The Spartans!

I had the privilege several months ago to record an episode for a new podcast series ‘You’re Dead to me!’ hosted by Greg Jenner, made by Muddy Knees Media, and now available via BBC Sounds on all podcast platforms. 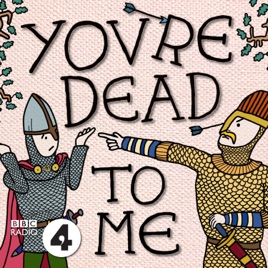 Our episode (about the Spartans) was the pilot episode for the series. As we recorded we were feeling our way towards the series format. In fact, I can take some credit for the final title of the series – Greg was kind enough to suggest on Twitter that one of my lines in our episode: ‘You’re Dead to me!’ (I was referring to Spartan women talking to their sons) may well have lead him towards that line as a title for the series!

The series hopes to get people who had given up on history interested again in history. It does so by hosting a chat between Greg, a specialist historian in the particular period under discussion, and a comedian. For us it was Greg, myself and Joel Dommett – who was at home talking about the Spartans as he is always getting up to crazy outbound adventures – a real Spartan!

We recorded in the offices of Jazz FM in London. And from the off it was such fun. Taking history, asking some good questions of the past, giving us all a space to revel in the fun, craziness, amazing-ness and downright (occasional) silliness of the Spartans, all wrapped up with a good dash of historical analysis and critique. And of course an occasional impression of Gerard Butler and 300! THIS IS SPARTA!

Take a listen to our episode on the Spartans here:

as well as, of course, to the other episodes covering a wide range of historical topics and featuring a fantastic range of historians and comedians, all deftly compered by Greg. You’re Dead to Me has been at the top of the itunes podcast charts so it sounds like it has hit the spot. Bravo to the whole production team and Fingers crossed for season 2!